Ever wonder what the most expensive jewelry ever sold looks like?

Earlier this month, the late Liz Taylor made headlines once again. In her lifetime, the Hollywood beauty was famous for her love of jewelry. Naturally, when her collection of jewels hit the auction block, they made a big splash. But few could have guessed that this would become the most expensive private collection of jewels by such a large margin. Liz Taylor’s most expensive jewelry was expected to rake in around $30 million. But the final sale price was far higher at $115.932 million. The star attractions in this collection included the historic La Peregrina necklace, the famous Elizabeth Taylor Diamond and a Taj Mahal ruby. 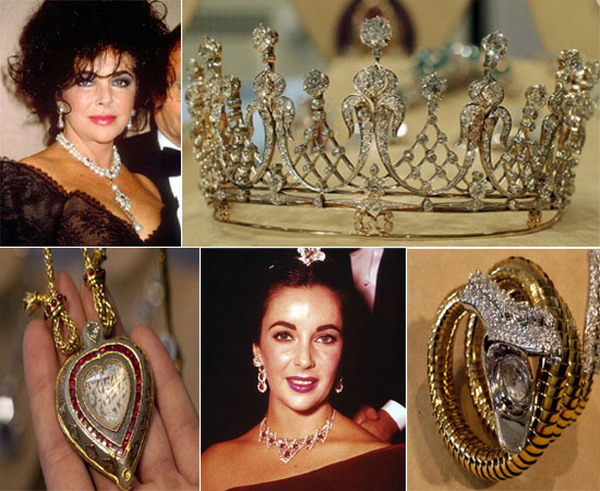 This eye-catching jewel from the house of Bulgari is a most expensive ring. After all, it bears not one, but two large diamonds. In fact, it is the perfect proposal ring for girls who love big rocks. The triangular-cut fancy vivid blue diamond alone weighs 10.95 carats. Complementing the blue of this rare diamond is a triangular-cut white diamond that weighs in at 9.87 carats. The most expensive ring was created in 1972. But it earned its “most expensive” tag as recently as May 2010, when an Asian collector purchased the ring for $15.7 million after a furious bidding war. 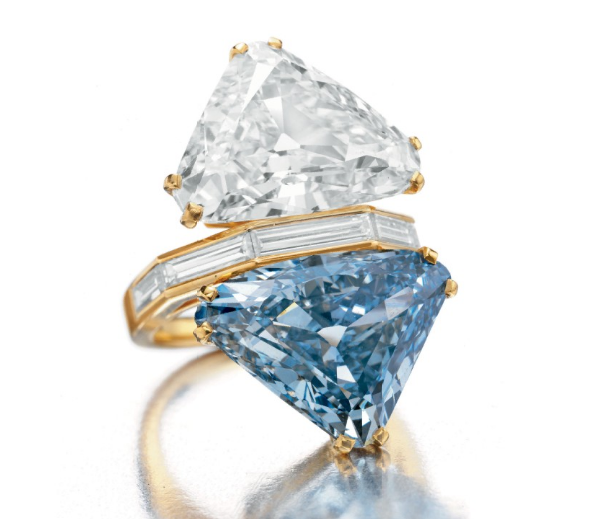 Have an eye for unique jewelry? Then take a look at Wallis Simpson’s Panther Bracelet. Simpson, who later became the Duchess of Windsor, was the reason why King Edward VIII had to abdicate the throne and become Duke of Windsor. On becoming a duke, he gained ownership of the kingdom’s royal jewels. The panther bracelet was part of this exclusive jewelry collection. Designed by Cartier, the panther sits mid-crouch, as though ready to pounce. Adorned with diamonds, rubies, sapphires and emeralds, this is a most expensive jewel. No wonder it fetched well over $12 million at a Sotheby’s auction in London. Moreover, as if the adornments and the royal connection were not enough, rumors abound that singer Madonna has purchased this exclusive jewel. 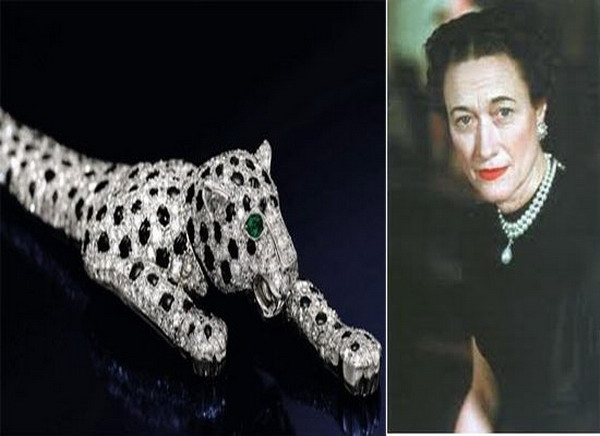 This dazzling emerald and diamond tiara is fit for a queen. This most expensive jewel was commissioned by German prince Guido Henckel von Donnersmarck. He presented the tiara to his second wife Katharine around the year 1900. Some experts believe that Eugenie, the wife of Emperor Napoleon III of France, also owned this gorgeous tiara at some point. The diamond-studded tiara contains a row of 11 polished pear-shaped emeralds worth 500 carats. The white diamonds complement the rich green of the emeralds beautifully. It is not hard to understand why an anonymous bidder was willing to pay a record-making $12.76 million for this magnificent jewel. 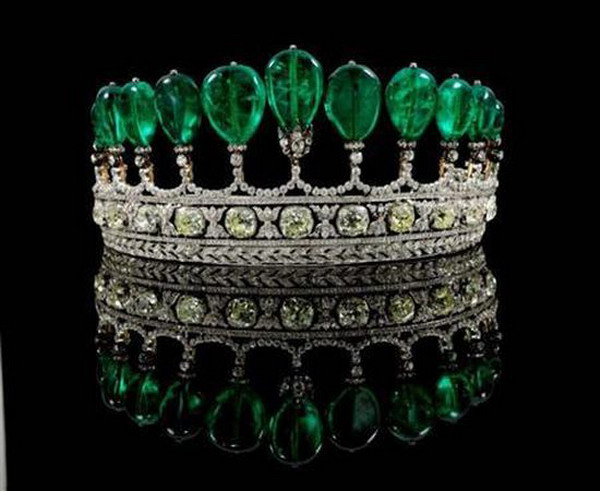 In 2009, the world was still reeling under the effects of the recession. But even the economic crisis could not stop this vivid pink diamond ring from selling for a record $11.8 million. The vivid pink color of this gemstone resulted from exposure to heat and pressure within the earth’s crust. The fancy-cut cushion-shaped diamond originated in the mines of South Africa. The 5-carat pink diamond is mounted by Graff diamonds and set on an elegant ring. 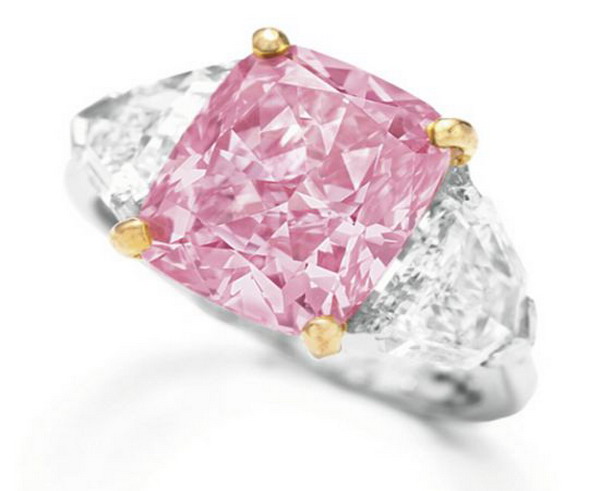 In April 2008, the Louvre successfully managed to bring a historic jewel back to France. The Louvre paid $10.5 million for the pricey bauble. But the price must have been well warranted, for the Empress Eugenie Brooch was a piece of French history. Sculpted into a bow-like pattern, the gorgeous brooch features openwork of European-cut diamonds. The most expensive jewel ranks among the best fine jewelry of the world. Moreover, it is an antique piece dating back to approximately 1855, when Francois Kramer created the expensive brooch for Empress Eugenie, wife of Napoleon III. 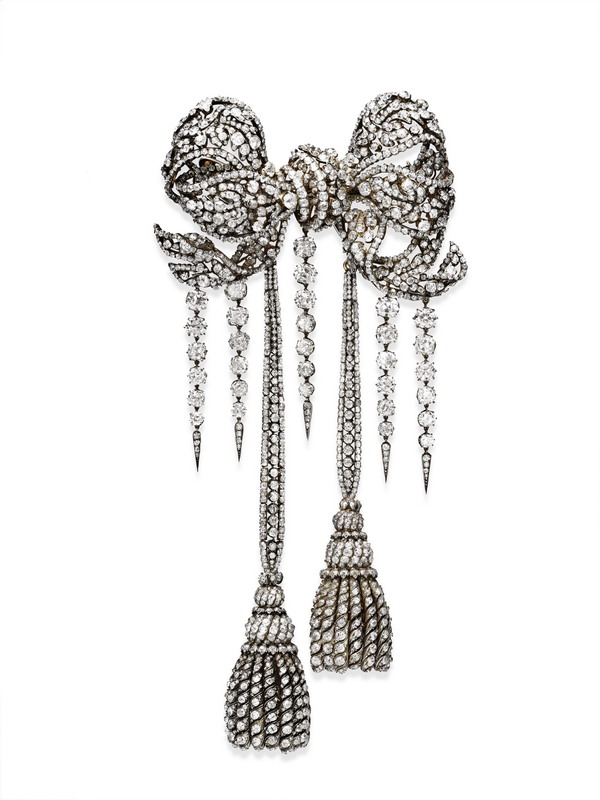 The vivid blue diamond ring in the picture above is a most expensive ring. Experts in the world’s most expensive jewelry are likely to well versed in the characteristics of this prized jewel. This ring features a large 6.01-carat cushion-shaped fancy vivid blue diamond as the centerpiece. Two oval pink diamonds flank two sides of the blue diamond. The pink diamonds – also rare gems – weigh 0.46 and 0.44 carats respectively. The three diamonds rest on a platinum ring. This piece of fine jewelry fetched the highest price per carat for auctioned fancy vivid blue diamonds, when it sold at Sotheby’s Hong Kong for $10 million in October this year. 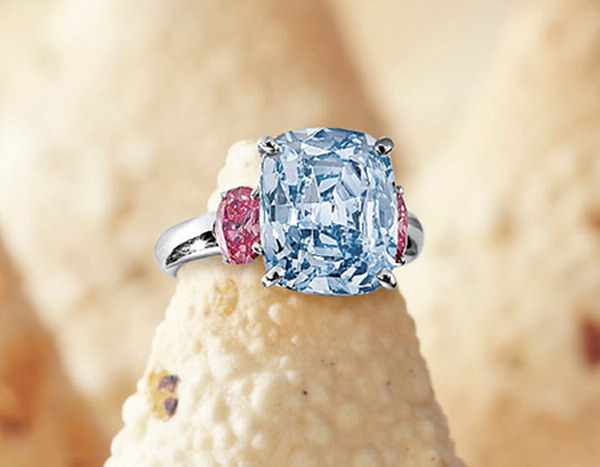 In 2009, this flawless blue diamond ring proved to be the star of Sotheby’s semi-annual sale in Geneva. The simple but elegant blue diamond ring fetched $9.69 million at the auction, taking even serious collectors by surprise. The rectangular blue diamond sits atop a platinum ring. The rare diamond weighs 7.03 carats and was found in South Africa’s famous Cullinan mine in 2010. Despite the handsome price, the diamond is no larger than a coin. 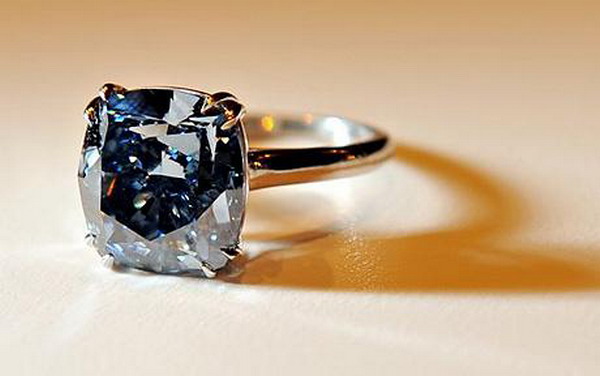 As the name suggests, the Golconda Diamond Earrings were born in the Golconda mines of India. Sometimes also referred to as the Imperial Cushions because of the cushion-shaped diamonds, this gorgeous pair of earrings is an example of truly exclusive jewelry. This glittering pair of danglers weighs about 23.11 carats. The earrings emerged for auction during May 2011 at Christie’s Magnificent Jewels Spring Sale in Hong Kong. An anonymous bidder purchased the expensive jewelry for $9.3 million at the auction. 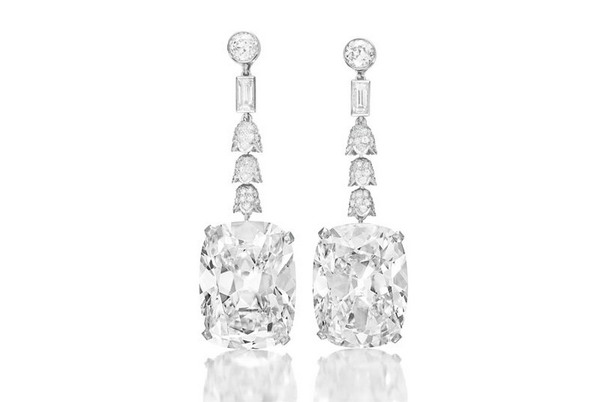 The mines of Golconda are represented yet again on our list of most expensive jewelry to be sold at an auction. The pear-shaped Golconda diamond ring was set to show up as part of Sotheby’s Magnificent Jewels and Jadeite Autumn Sale 2011. With an initial asking price of $6.5 million, there is no doubt that this is a most expensive ring and a piece of fine jewelry. The star of the unique jewelry design is the 30.31-carat D-color uncut diamond. The GIA certified the diamond to be of Excellent Polish and Symmetry. 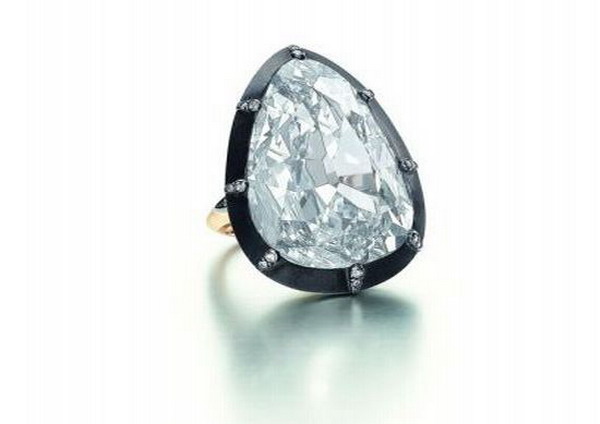 This green diamond ring is designed to make onlookers go green with envy. The ring emerged at Sotheby’s auction of Magnificent Jewels. Although a buyer paid $3.08 million for this rare diamond at the Geneva auction, it is not the most expensive jewelry that we have seen. Having said that, the diamond ring bears a single unique distinction – it is the largest green diamond to have ever been sold at an auction. The rare naturally green diamonds weighs 2.52 carats. 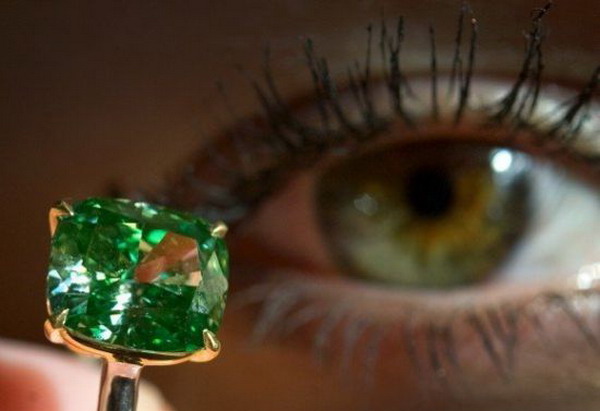 When it is a question of elegance, very few pieces of fine jewelry can compete with the rare blue diamond ring. Bulgari custom-designed this ring for a European collector in the 1960s. The collector presented the ring to his wife. The ring’s $2.9 million price tag sets it among the most expensive jewelry in the world. Earlier this year, Bonhams conducted its Fine Jewelry Sale that included this most expensive ring. The Bonhams sale marked the ring’s first auction appearance. The juxtaposition of the white and blue pear-shaped diamonds along with the detailing on the ring, makes for a unique jewelry design that is well worth the price. 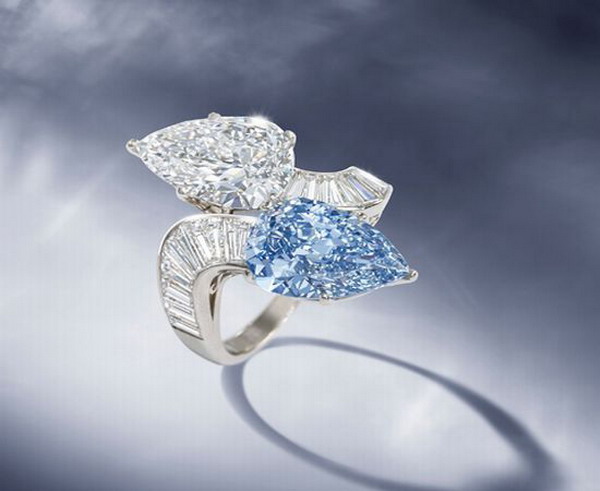 “Diamonds are a girl’s best friend,” sang Marilyn Monroe in her pink dress. And flowers score brownie points. So why not merge the two? The red diamond ring blends the dazzle of a diamond with the beauty of a flower. More importantly, it shares the platform with some of the most unique jewelry to have ever been auctioned. English jeweler Laurence Graff recognized the value of the red diamond ring when he purchased it for $2.6 million at a Christie’s auction. The maroon color of the central diamond is rare enough, but rarer still is the diamond’s octagonal shape. The ring is truly a collector’s item. 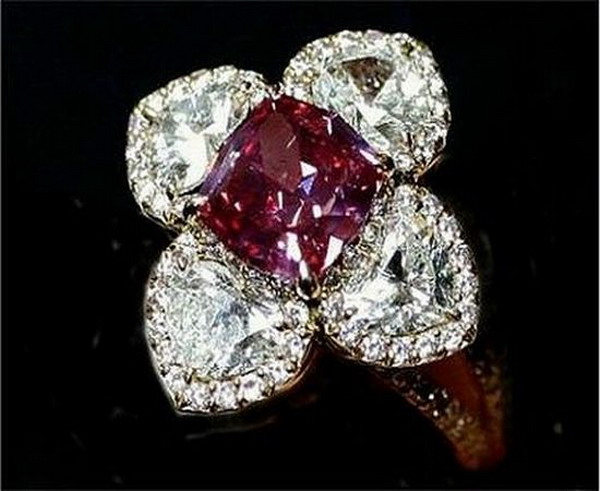 Mismatched earrings can be a great fashion statement. But none more so than these mismatched earrings by Indian jewelry designer Nirav Modi. This set of most expensive jewelry could very well be the most expensive mismatched earrings in the world. The pair fetched over $1.38 million at a Christie’s auction in Hong Kong earlier this year. The blue, pink and white color scheme is common to both earrings. But while one has an oval 2.22-carat blue diamond as the centerpiece and a white diamond for the earlobe, the other features a white diamond in the center and a blue diamond on the lobe. 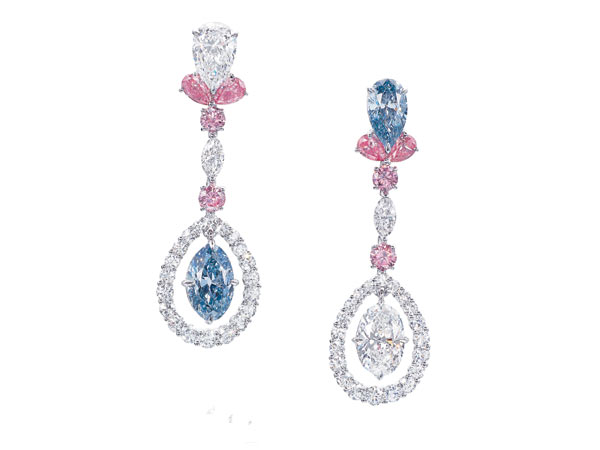 Rings have dominated our list of the most expensive jewelry to be auctioned. But the list would not be complete without the inclusion of this magnificent diamond necklace. The necklace features an 8.19-carat heart-shaped diamond centerpiece. We love the line of 24-carat marquise-cut diamonds. An anonymous bidder threw caution to the winds and bought this majestic necklace for $450,000. If we had that much money to spare, we’d probably do the same. 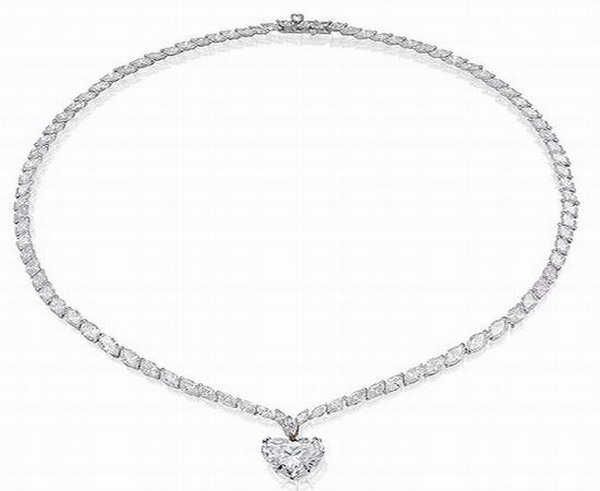